Build an Ark before the Flood washes you away.
Chop and gather wood or produce and program bots to make it in time.
Bots have very limmited memory. Use it wisely, since software is producing data, besides it's constantly leaking.

At start it was unclear how to remove the leaking data and it is still unclear to me how to gather the yellow data. I was only able to fill the progress bar one third of the way, because the guy just moves so freaking slow. I guess the whole leaking and producing data is part of the theme, but it just doesn't make any sense. The rising water also decreases the space, therefor playing to the theme. So I would recommend leaving out the leaking and producing of data.

Instead the player could build  more robots using wood from the trees. So they have to choose between progress of the arc or making more robots, to then build the arc faster. It would also be nice if the robots could cut down trees and if the walking function was left out of the game. Though it is good that you can only pick up trees at their base and only after they are lying on the ground.

Yellow data is your money. There would be upload button, but you can just drag and drop to the left-upper corner (not obvious, true).

I agree, should've made it easier: single resource, no data or leaking, but we wanted to fit to the theme in unusual way 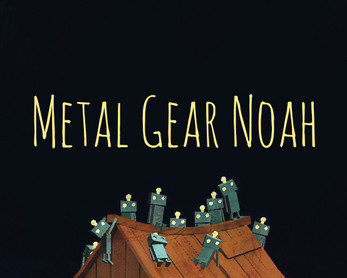